For the first time in ages, I actually had a relatively solitary weekend, barring an hour on Saturday morning when I went to gym and to shop for our annual orphan shoe box Christmas project (and I bumped into someone from my past.  The encounter rattled me six-love)…This person wronged me in heinous ways.  He hasn’t changed a single iota.  He is still arrogant and self-serving (and that is not judgement, it is a mere statement of fact).  I was angered (in reaction to the icy fear that had gripped me) by his nerve to want to strike up a conversation, but I was instantly reminded of this: 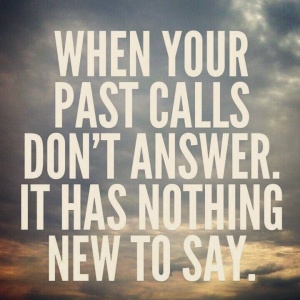 So, without a word, I simply smiled and walked back to my car, constantly reminding myself that I’ve dealt with this part of my past, but seeing him still rattled me.  For a while I was left feeling scared, guilt-ridden, aloof and alone, but once again I was reminded…the past has nothing new to say.

Now, I have a vibrant, bubbly personality (not my words, but those of others), so being on my own is not something I really used to enjoy.  Enjoy is probably not the right word, but I have learnt to become used to it.  I haven’t really had much choice, given the fact that solitude was pretty much forced on me when I moved into my own place at the beginning of the year.  Some rainy days I absolutely love, but others, like Saturday, all I want to do is sleep, and I know that is not a good sign, so I opted for a day on the couch, under a blanket, watching TV (to numb my brain because the past kept trying to call).  I wouldn’t have minded another breath in the house, but that was all I wanted, the breath – no conversation.  Needless to say, that is like hoping to win the lottery without buying a ticket, so I ended up “just being” on my own.

I don’t know when it happened, but I know I fell asleep at some stage.  It was there that God laid another message in my spirit – not to look at what is past.  I know it partly has to do with the run-in at the mall, but I feel too that it is to equip me to aid two other friends who I know are going through tremendous difficulties.  One is close by, and another is in the United States.

Anyhow, two hours that evening I walked a few laps at the yearly Cancer Awareness Marathon with Daniel.  Neither one of us was in much mood for conversation.  Elizabeth and Zena would have joined us too, but the former took ill and the latter forgot that it was her year-end-function.  The Marathon is usually held at a local outdoor amphitheatre, but the weather was miserable, so it was moved to a local community hall, which made for very little atmosphere and a difficult walk because there are literally hundreds of people on the “track” at any given time.  I bumped into one of my Herbalife friends, Jade, who, no matter how hard things are, is always positive.

When she saw me she flung her arms around me, kissed me hello and promptly dragged me away for a quick chat.  She is simply a shining light.  Just before I left  I gave her a hug goodbye and she left me with these words, “I love you Girl!  Forge on! Be happy!!”

Yesterday morning I woke up feeling a little blah, but I hauled myself out of bed because I was expecting friends for a Sunday Bring-and-Brunch.  I try to organize a get-together of some sort mid November so that we can all see each other socially before the madness of December kicks in.  So often there is some kind of politics when it comes to arranging a get together because there is almost always someone who doesn’t get on with someone else, or has some kind of issue because of something one has done which actually has nothing to do with the other at all, but they feel they have a right to voice an opinion.  Honestly, it gets me down, especially because I have a lot of friends who I see on a regular basis.  If you’d got to know me a decade ago, you would have noticed that I wanted to be in control, because of things from my past, that I dragged to my present.  Well, that baggage is now in the permanently-long-gone-blackhole-of-I-don’t-give-a-rat’s-hoo-hah.   Maybe it’s wrong, but I work hard daily to be a live-and-let-live kind of person. Sometimes I’m still a push-over, but I’m learning… If I disagree with something one of my friends does, I will talk to them personally and then move on. I just realized as I typed that sentence that it is leaving the past behind.  God is still talking 🙂 If I disagree with something one of my friend’s friends does, I will mention it to the former, but I will not hold it against the latter.  After all, it has nothing to do with me.

I was expecting quite a big turn-out, but three people cancelled due to illness, two promised to pop in for coffee later in the day (but also ended up not pitching) and Ewan excused himself as he had to study for his exam which happens tomorrow. Inevitably, when we visit at my folks’ house, we always end up sitting around the kitchen table.  It ended up just being Carmen, Daniel, Ella, Nathan, Zena and I, but we had a great time. Nathan and the girls all left at the same time, so I “kidnapped” David and took him to see one of the places I recharge my soul…A place close to where my parents stay called Geelbeksvlei. 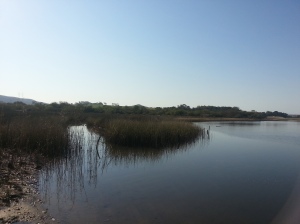 After that little trip we went back to my folks’ place and he too headed home.  Once I’d sat down again, the silence was deafening, but it is in that quiet that things mill through my mind and I gain clarity.  Many of you will know that William P. Young’s The Shack absolutely changed my perception on many things, as did his follow up book Crossroads.  It certainly opened my eyes to look at forgiveness through different eyes.

I texted one of the friends mentioned earlier and chatted to them about forgiveness.  I spewed a great deal of The Shack in the conversation too, but I feel that it helped – not only for my friend, but for me too – as a reminder to move forward; to be grateful for today.  One thing that still resonates with me is “Forgiveness is not about forgetting.  It is about letting go of another person’s throat… Forgiveness does not excuse anything…Forgiveness in no way requires that you trust the one you forgive…Forgiveness does not create a relationship. Unless people speak the truth about what they have done and change their mind and behavior, a relationship of trust is not possible. When you forgive someone you certainly release them from judgment, but without true change, no real relationship can be established”. Forgiveness allows you to move on, releasing yourself from the pain, because “pain has a way of clipping our wings and keeping us from being able to fly.”

I guess what I’m trying to get across with this crazy ramble is to be grateful for the people that make an effort to be in your life during this phase – regardless of the distance. Forgive the ones who have wronged you, because you could honestly put your hands to better use than having them wrapped around someone’s neck (half the time they probably don’t even know that you’re bitter.  They are simply carrying on.) Move on.  Live in the present.  The past is just that. P.A.S.T.  There is nothing one can do about it, except to stand firm in the knowledge that God makes all things (not just all the good things) work to the good of those who love him and who are called according to his purpose. (Romans 8:28)

One thought on “On Forgiving and Forging Forward…”