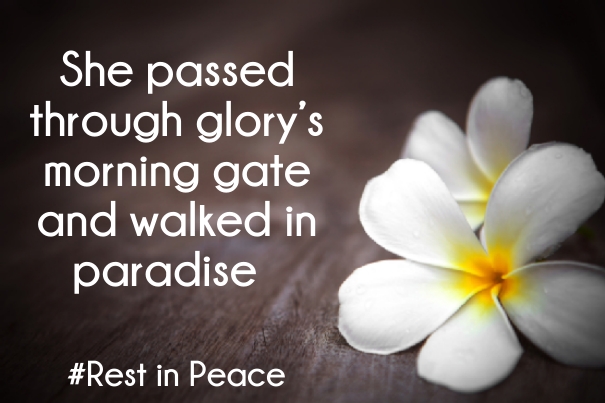 On Saturday evening, Wolf’s mom has left her diseased earthly body, exchanging it for her angel wings.  Her pain is finally over.  Yes, the doctors said three to six months, but the reality of the situation was, that today marks nineteen days since Wolf shared his mother’s diagnosis with me.  How sick she was before then, I do not know, nor did I ask.  The news in itself was awful enough.

While she was Mom to Wolf, she was an unofficial mother to many of his friends too.  Her name was Verona, or as I sometimes referred to her, Ma-V.  I was fascinated by her name, and only a while after having met her, did I find out Verona is a town in Italy.  Verona and I often talked about our dreams – both of us wanting to tour Europe, having even gone so far to get the brochures, check out the tours and make plans – only to never execute them, because we were always too busy with the things our lives threw at us.

She often said that she wanted me to write her life story.  I thought she was being flippant, but it turns out her desire for me to tell her story was genuine.  I feel dreadful about not taking her seriously.  I said to Wolf I would write it posthumously, but he said there is so much even he doesn’t know, and if I’m honest with myself, I would be doing it for the wrong reason:  guilt.  And I know Verona well enough to know she wouldn’t have wanted it that way.

I have fond memories of her.  Our first meeting – an unplanned New Year’s party at Wolf’s house, where a few of us, Elizabeth included, shared a concoction of booze out of a giant wine glass, while we laughed at Wolf who decided the best outfit for the occasion was his late Gran’s bathing costume.

I spent some time with her and Uncle Jannie, who I endearingly refer to as Oom Brombeer (Oom Grumpy Bear).  For the first while of that holiday, I spent time with them in their little home in Queenstown, where I learned that wild spinach or umfino is an edible weed.  It was a cold night and we sat at the little kitchen table, each with a little tipple and she made pancakes for us.  She tried to teach me to make them, but alas, I am not made for such delicate kitchen ventures.  That same trip she ran me a bath after a phone call to my parents that had left me particularly upset.  She even went to the trouble of lighting a few kombuis-kerse  – “for effect, Koeks”.

During that same visit, I convinced her that she and I needed a spa day.  She had never done something that indulgent, Koeks, but she eventually conceded defeat and made the appointment.  Not wanting to scar her for life during her first visit by taking her for a therapy that required any kind of undress, we opted for Indian head massages.  While she said that she had “loved it, Koeks,” she couldn’t wait to get home fast enough, so she could wash the oil out of her hair.  I tried to explain that the longer she left the oil on her hair, the more relaxed she’d feel, but she was having none of it.

We left Oom Brombeer in Queenstown and headed off to East London where he would join us later that week.  With no real plans, we took a slow drive, turning off at a sign that said “Thomas River”, which is a historical hamlet with a population of less than ten residents.  We had a ball there, taking pictures and chatting to one of the gentlemen in the restaurant/bar.  It was amazing to be in a place that time had literally forgotten about.

That weekend, Wolf and his dad joined us and we went out for a seafood dinner.  What. A. Night.  She still talked about it the very last time I saw her, which I will get to shortly.  We happened to walk into someone that she and Oom Brombeer did business with, and well, the man did think he was the last Adonis.  He passed some remark and without missing a beat I replied with something that had him opening and closing his mouth wordlessly, like a fish out of water.  A while later, the waiter brought a bottle of wine, “compliments of the gentleman at that table,” he said, pointing at the Guppy Man.  Nodding our thanks, we proceeded to savour that bottle of wine and regale tales of all sorts which had all of us laughing to the point of losing our breaths.  That night I really began to wish Wolf had made different decisions about his life and having me in it on a more permanent basis, but it wasn’t meant to be.  I wanted to pay the bill, given that I had spent almost a fortnight with them, but when I took my credit card out, there was a scuffle, some confusion and my deceptive ears heard, the bill had been settled, so I hooked my ‘skoonma’ (Afrikaans colloquialism for Mother-in-Law) into my arm and we headed off to the car, quite loud and cheery, mind you.  Imagine our surprise when the waiter came charging after us to tell us the bill hadn’t been paid.  We had unintentionally bilked, but I sorted it out quickly enough.

Another time I visited them in East London, I had big plans to cook mussels in garlic and white wine as a treat for them.  I had just got the sauce simmering on the stove when the electricity blacked out.  Verona was looking way too forward to that meal so she delegated Uncle Jannie to find the gas bottle so I could finish cooking that way.  It is probably a good time to mention that I am shit scared of anything that remotely has to do with a gas bottle, and that, as a really short person, I most often, when forced to use this means of heat, have to either stand on a chair, or have the cooker on the floor so that I can see into the pot.  This time was no different.  The gas bottle stood on the floor with the pot gently bubbling on top of it.  Every so often I would flick on the torch to see that the food wasn’t being scorched by the scary blue flames.  Oom Brombeer pulled the car close to the verandah, popped on the headlights , opened the doors and put the radio on and the three of us danced on the stoep, like we were the only people in the world.  We were brought back to reality quite quickly though because when I passed the kitchen on the way to the loo, I happened to notice thick, white sauce – all over the kitchen floor.  I was horrified, but Verona laughed it off and set to quickly mopping the gross, garlicky mess up.  I don’t remember what, if anything, we ate that night, but I remember laughter, fun and smiles.

I used to also send her and Oom Brombeer a care-package every so often – in the days when I could actually afford to.  One time I packed them a box with all sorts of goodies, including a bottle of home-made ginger beer.  As there were also fragile items in the box, I filled the box with polystyrene chips to protect the goods.  This was in the time that Verona still drove the Fiat Kangoo panel van.  I will never forget that phone call as long as I live!  “Koeks,” came the panicky voice, “the entire panel van is covered in polystyrene chips!  Something exploded in the box.  Good thing I wasn’t in the car.”  Realizing what had happened, trying not to laugh, despite the ridiculous picture I had in my head of the scene, I mentioned that there was a bottle of ginger beer in the box and that I hadn’t thought it would “go kaboom”.  Later than night she sent me a message telling me that now that she was sitting down with the little bit of ginger beer that hadn’t made it out of the bottle, she was roaring with laughter at the memory.

Later she and Oom Brombeer adopted a little girl, Kerry.  That is also something I will always remember about Verona – how she had always said she’d wanted a daughter, and how, by an unplanned turn of events,  she had been fortunate enough to have that one desire of her heart.  One thing about Verona is that she was a great mother, not only to her own flesh and blood, Wolf, but to little Kerry too.  She was a great second mom to me too, even though as life happened, and we didn’t get to see as much of each other as we would have liked, we still stayed in touch.
The last time I physically saw her was about two years ago, when she, Oom Brombeer and Kerry were here on holiday.  Oom Brombeer took Kerry to the water slides and Verona joined me for a spot of tea, in my flat.  It wasn’t a long visit, and had  I known it would be the last time I would ever see her alive, I would have told her more important things, than just the mundane.

There are many more memories I have of Verona, but I think for now, I’ve shared enough.

Ma-V, thank-you for setting such an incredible example to so many of us about tolerance of hardships, gentleness during perseverance, faithfulness in times of hopelessness and loneliness, and for being such an inspiration to so many, myself included.  I promise that one day, if I am ever fortunate enough to visit Italy that I will go to Verona, and find a quiet spot somewhere there to tell you all about it, because I know you will be listening.

Thank-you too for the happy film reel that will continue to play on in the hearts of all the people that you touched with your gentle, open and ever-joyful character – You will not be forgotten because your spirit lives on in your family who is left behind.  You are the epitome of the term, steel magnolia, Ma-V.