When the alarm clock went off this morning I couldn’t believe that it was time to get up for work already.  Why does that always happen when I go to bed late?  One would think I could trick my body into thinking it sleeps longer.  Maybe I should try Steve’s route – his wristwatch is set 18 minutes ahead, so his body thinks it is sleeping longer than it actually is (even though it gets up 18 minutes early?).  I don’t understand the logic exactly, but hey, to each his own, right?

Oh well, I am not complaining too loudly.  Fortunately things are quieter at the office today.  I’m proud to say I’ve even done some cathartic purging.  I think I’m in love with the shredder…  Those of you who know me know how I just can’t seem to throw anything away.  The result?  A mountain of paper that, if printed on both sides goes into the shredder, if not, then into the recycling box.  I’m thinking that my office needs some personalizing.  I shall have to look for some photos – probably over the weekend.  And a pot plant too, I think.  That I’ll have to research though, considering that there is no natural light in my office (I’m surrounded by three solid walls and my door looks out onto the passage).  Any suggestions?

Today, a very special online friend of mine is celebrating the renewal of her life year.  Cindy here’s wishing you a wonderful day, and a year filled with blessings and God’s Love.  I pinched this cake off the internet for you 😀 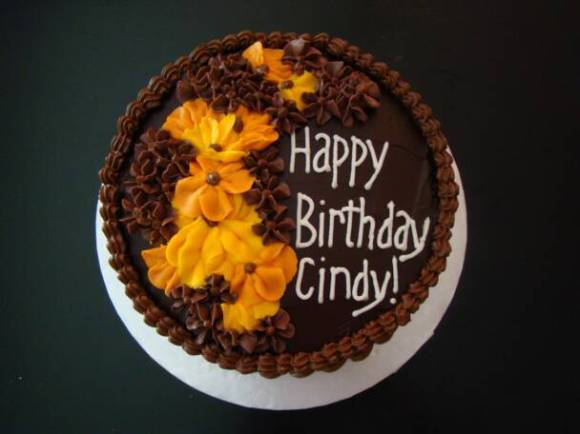 One thing I didn’t put on my 2013 Bucket List was to play more Facebook Scrabble.  As it is a new year, I reset my stats and have already lost my first game, to a bloke living in London.  I am playing a game with Granny1947, but the board is so tight, there is not much place to build.  I’m sure the next one will be better.  I am getting my ass whipped solidly by another player (her name escapes me right now), who has had four seven-letter words in a single game.  I have great luck, but that is something I’ve never had happen to me.  Maybe soon.  Poor woman keeps apologising, as if it’s her fault the computer gives her better letters than it gives me.  I definitely want a rematch!

Elizabeth is having a rough day at work.  One of her colleagues is on leave and the other has taken ill, so it is just her and another lady that have to do all the work.  I sent her a message that says, “Keep Calm and Drink Wine”, but that is obviously not an option right now.  Part of me could hear her cursing me under her breath, and it makes me smile.  She’s a tough woman, she’ll get through it.

On other fronts, Carmen is hosting a surprise for hubby Ewan tonight, in celebration of his thesis-study finally being finished after five long years.  His dedication to his study has been admirable.  He is blissfully unaware that about 30 of his closest family and friends are going to be there tonight to celebrate with him.  I hope someone remembers a camera!  Speaking of which, I must get back into the habit of carrying mine around with me.  I have seen some stunning photo-ops lately and haven’t had my camera with me…grrrrr  Sure, I have my blackberry, but sometimes 14 megapixels are needed to really catch the clarity of an image.

On the menu for lunch – Herbalife shake.  It’s odd, you know.  I kicked my heels in hard when Steve suggested a meal-replacement shake, because “shake” has that diet connotation to it (and besides, I like to chew my food), but I must say, I love my shake – it’s Toffee Apple and Cinnamon (the last one in the country, because it was a limited edition) – it’s quick, easy, nutritious and it tastes good.  I’ve also taken to Herbalife Protein Bars (healthy chocolate!).

Well, I’ll leave you with all these arb ramblings of mine for the moment.  I feel a philosophical conversation brewing in my head, but that is for another time.

Have a terrific Tuesday y’all!

Cindy, I hope you have a wonderful day and that the new life year will hold many blessings, surprises, happiness and love for you.