My previous pets control post has reached many people according to FB, but the stats on WordPress paint a different picture. I’m not complaining, merely stating a fact. Everyone that took part in the challenge – thank you! Your pets not only touched my heart, but those of many of my readers. Charles from work read the post, and sent this pic of his wannabee-lockdown-escapee, Tash, to me. I told him I’d include her in my next post, so here she is, in all her attempted-breakout glory.

END_OF_DOCUMENT_TOKEN_TO_BE_REPLACED

Yes, you read right. I did not have a dyslexic moment. The major portion of this post is going to be about my friends’ pets, and how furry, feathered, and scaled companions have made lockdown easier for many, including myself.

For those of you that are inclined to have Seriously-Sensitive-Susan moments, a great deal of this post is written tongue-in-cheek. The idea is not to offend, but to bring humour, and hope. Please read (and accept) it in that way.

END_OF_DOCUMENT_TOKEN_TO_BE_REPLACED

I got my new passport on Monday! Judging by the photo, I look like the Godmother of a Mafia family. Seriously, the camera adds way more than 5lbs. Especially to my chin! If I was green, I could pass for a Raxacoricofallapatorian Slitheen. If you don’t know what that is, you need to find The Doctor, and soon!

END_OF_DOCUMENT_TOKEN_TO_BE_REPLACED

I’ve been thinking about suicide a lot this past week.  Murder too.  And no, I’m not planning on taking my own life, nor that of someone else (although I’ll admit, as a wannabe writer, I’ve come up with some plausible, but not-yet-perfect ways to get away with it).

My curiosity stems from excessive screen time over the Easter weekend.  I have to push my limits a little, and I think I did fairly well, considering.

I spent some time with my folks.  The Bean was watching a movie called A Father’s Nightmare which I only caught the last fifteen minutes of but was able to pretty much piece the story together without much background info.

This was followed by Bird Box, starring Sandra Bullock (who at 54 could still pull off the role of a pregnant woman).  Now, I hate spoiler alerts, so I’m not going to be a tell-all and ruin the movie for those of you who may want to watch it.  All I’m going to say is that it’s not the best movie to watch if you’re on medication that may exacerbate suicidal tendencies nor if you’re prone to overthinking.  I’m still wondering why some people became zombie-like, immune to the unseen force that drove others to kill themselves. Despite being in both categories, I quite enjoyed it.  My rating is 7.2/10

On Monday I saw Chanté for a quick cup of Chai.  She asked about The Sperm Donor and what I’d done the weekend.  Turns out her hubby also wishes she’d change the channel off Crime and Investigation; she reckons she’s becoming clever.  We’re both in agreement on one thing:  We believe everyone has a breaking point where they can snap and commit murder.

The same evening, I saw Martha for dinner.  We didn’t discuss murder or suicide.  Damn pity, because she often has a very logical take on things so it would have been an interesting debate.  She did tell me about a book she’s reading about people’s near-death-experiences.

Last night I had hake in coconut cream, with salad, sweet potato fries and rice.

The friend, Esmeralda (whom I dragged out in attempt to make her feel better about a crap situation) had pizza.  I obviously can’t go into detail as to what said shit-storm entails, but she did say I am so tired of it; that (wo)man is going to drive me to suicide.  I don’t think I’ve ever heard her utter the word suicide in the fifteen-plus years I’ve known her.  She kind of changed when the situation started, but every time I see her, she seems more emotional, whether angry, sad, or frustrated.  Like me, I don’t think she’d ever put action to her words, but as her friend I feel helpless as I watch her fall deeper into a fit of self-doubt.

One thing I do know is if she had to commit murder I’d probably be the one she’d call to help her bury the body, like Gabby did with Bree and Lynette, because at the rate we’re both going, we are our own brand of Desperate Housewives, living in our very own Wisteria Lane. 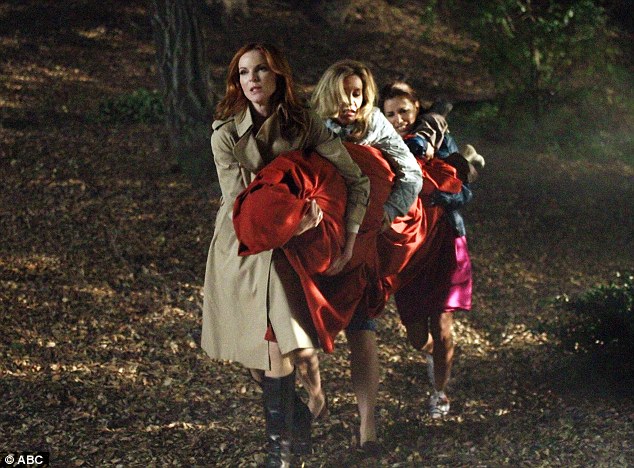