…on board was a fun-filled evening…Tropical Carnival night.

After another losing round of Bingo, I got dressed in my most sparkliest dress for dinner.  Here I am, along with my fellow diners:

On the left is Yours Truly, Yolanda, her parents, Johanna and Coen and on the far right, Ken Cornish – a fascinating gentleman who survied the Second World War.  He tells stories that can engage you for hours.  He gave all of us his postal address (he says he is too old for this new fangled e-mail) and I sent him a postcard yesterday.

From dinner we went to another show – again an amazing array of costumes were on display with superb dance- and acrobatic routines. 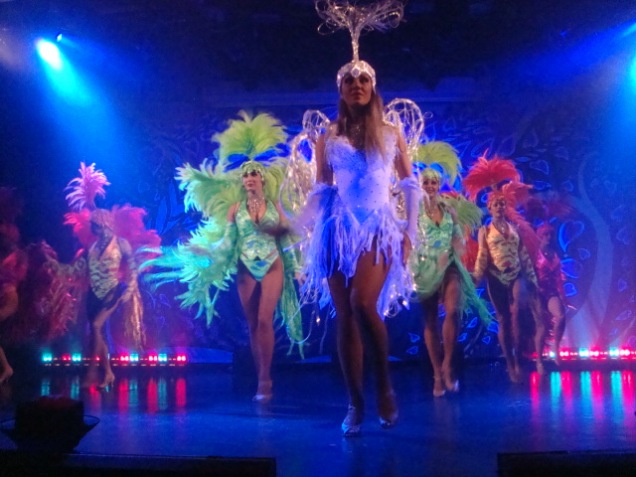 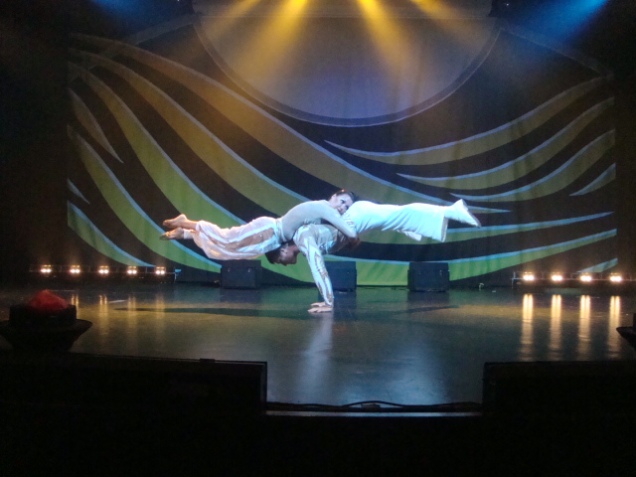 From there I went back to my cabin to get changed – my killer silver heels were killing me!  I opted for my black pants and a hankerchief top.  Up to the aft deck where the Tropical Carnival party was already in full swing.  Some members of the Dream Team were giving a Merengue lesson, but I just couldn’t get it down pat, so I opted to just soak up the party atmosphere.

For those partygoers who had worked up an appetite with all the dancing, there was a magnificent buffet served at midnight. 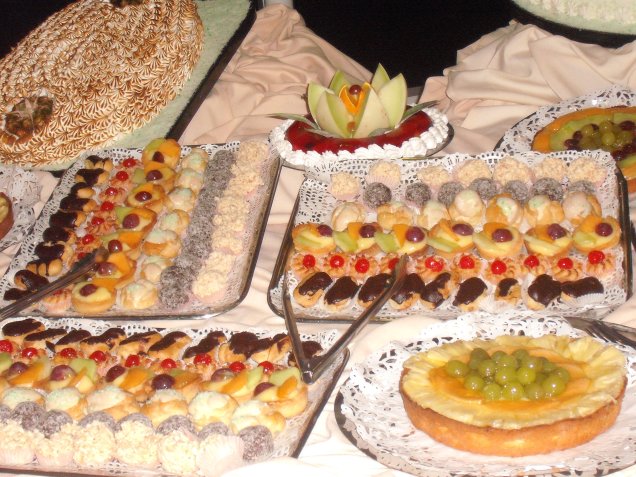 Many stories are rife about many members of staff (officers included) who try to take advantage of single women on board, but this theory was proved wrong…after having a bite to eat, I bumped into Chief Engineer Guiseppe Balzano who asked me if I still wanted to join him for a drink.  I declined, feeling positively exhausted, and without argument, he took my by the arm and escorted me to my cabin and with a polite kiss on the cheek, bade me goodnight.  So, there are still some gentlemen in the world…

I was so exhausted, I slept in my clothes (without my shoes of course…)

…welcomed us with pouring rain!

We boarded the Zodiac rubber ducks about an hour after breakfast – the sun was still gloriously high in the sky.  Mom was extremely nervous about the 12 minute journey from the ship to the beach, but her fears were soon allayed once she was seated and safely dressed in her life jacket.

Dad and Uncle Barry sat next to each other, on the outer edge of the boat.

We set foot off the Zodiac when I, along with my bag, containing my entire life, got knocked over by a wave.  I was suitably drenched, but fortunately the camera was dry and the rest of the stuff inside was only slightly damp.

As we started heading up to the Lodge, it started to rain… 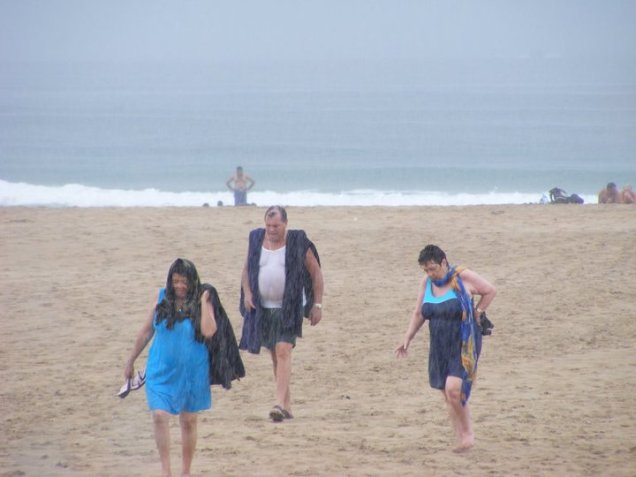 but it didn’t dampen our spirits – we swam in the rain.  The ocean’s temperature was like tepid bathwater.  If the water in Mossel Bay was like that, I would swim eveyr single day of my life.

As most of the excursions had been sold out by the time we decided we were going ashore, we were left with only two options – a Village Walk (thank goodness we passed on it, because we would have got even more soaked!) or a bus trip into the town of Inhambane.  We opted for the latter, which was a three-hour round trip, with some interesting things learned along the way.

One thing that struck me during the trip was that there wasn’t one single pothole on the road from Barra Lodge to Inhambane – definitely better than South Africa.

Our guide was a local gent called Lino

who told us many interesting facts about Inhambane.  Along the road, he stopped the bus and fought with a tree until he got this off.  It is a Cashew fruit – with the renowned nut on the top.  However the nut is not edible like this, it must be roasted first.  The fruit is used in the fermentation of local “hot stuff” (beer).

From there we made our way through the rural villages

When we eventually got to the town of Inhambane, we stopped at a local museu (yes, it’s spelt like that there), where we saw some interesting things, like the popular dhows that are used for fishing, an olden-day beehive and a “hot stuff” still: 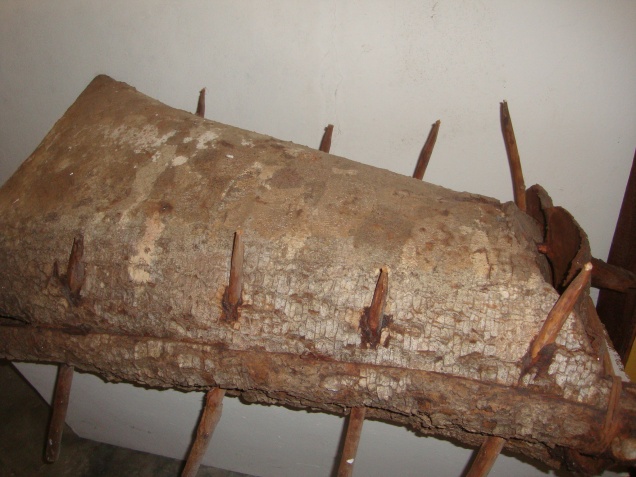 We stopped at two churches, but the rain had caught up with us again, so we did not get off the bus.  We also stopped at a statue of Vasco da Gama – there is a statue of him in our local museum too.

Our last stop on the tour was at a local market.  Not wishing to be mobbed by vendors again as I had in Maputo, I opted again to stay on the bus with Mom.  Aunty Carol, Uncle Barry and Dad got off, but they weren’t gone too long – apparently the smell of the fresh fish was a little too much to handle. 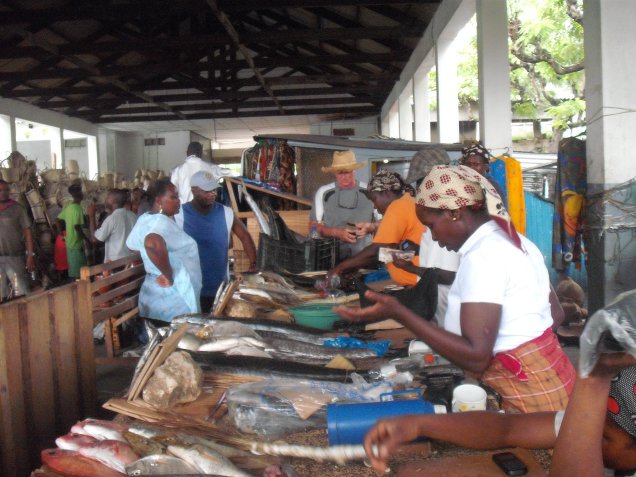 From there we headed back to the lodge, where we caught a Zodiac back to the ship.  This time I managed to stay dry!

Upon getting onto the gangway, I was greeted by a friendly face – that of Chief Engineer Guiseppe Balzano, who asked me to join him for a drink after midnight at the Pasha Disco Club.  I told him I would see if I could make it as I knew there was a serious party planned on board as it was Tropical-Carnival night, but…more about that and the cabaret at a later stage (probably Sunday) as I have to get ready for a G.N.O with Elizabeth and her sisters.

Have a great weekend everyone!