Just before the annual arrival of the Northerners to our little town last December, the municipality imposed water restrictions due to continuously lowering dam levels.  For me, it isn’t such a serious thing, because I’m at work during the day and the most water I use is to shower daily and wash – both dishes and laundry as needed.  For other households though, it is tough, more people equals more consumption and many houses have gardens which need watering (which is only allowed by watering can on certain days).

While at work on Friday it started to rain.  I didn’t hold out much hope because the heavens don’t usually open long enough to settle the dust and while the weatherman said we could expect heavy rain and thundershowers, the cynic in me uttered Dude, your is the only job where a person gets paid to lie.  It turns out though that this time he was telling the truth.

It’s been raining on and off (mostly on) since Friday.  Consistently.  The air smells fresh and there is a sense of renewal in the air, that only life-healing water can bring.

My newsfeed is filled with photos and videos reflecting the much-needed rainfall we’re experiencing.  My heart is bursting with joy because we desperately need the water.  In some places, people’s lawns have completely disappeared into sandy masses.  Soon there will be patches of green again.

The most heart-warming message I received about the rain was from Shayla-Rae’s mum.  To put things in a bit of perspective, their farm’s vlei (marsh) has been so dry for so long that a small aircraft landed on it on New Year’s Day.  Her message read Morning my girl – super rain, 40mm over the past two days and still coming down. The farm hasn’t been this wet in years. I look out over the valley and just can’t believe that the Lord is blessing us with this beautiful rain.

The weather has also been conducive to me getting quite a bit of work done for my freelance Noisy Digital job. I wrote a few articles, but this weekend’s work was mostly proofreading.  I love that I get to put the skills I’ve invested in, to good use.  On the subject of investments – until Friday, I had been blogging and watching series and whatever else on my little 10 inch Toshiba netbook.  It never failed me, as old as it was – it was so old that it still had a pop-up window to dial-up to the internet. 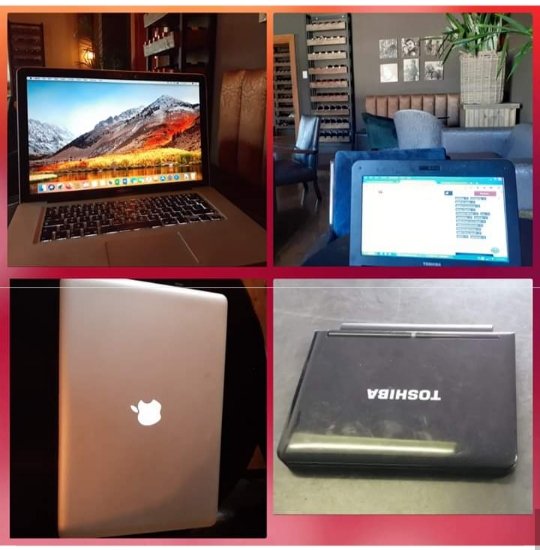 When the work started coming in, I knew that as trusty as the little thing was, it would get the job done, but I’d probably be insane by the end of the first day.  I got in touch with Nathan and asked him if he could help out with a good, secondhand machine.  He did.  I am now the official owner of a 15 inch MacBook Pro (I think he said I3 or I5) and I’m thoroughly enjoying it, now that I’ve got the hang of the touchpad and that the ‘x’ to close a window is on the left of the screen as opposed to the right on the Windows PC I work on at my regular job.  Having a large screen to read on, and a much faster processor is a huge blessing.

On other random weekend-related news:  I am reading Confessions of a Murder Suspect by James Patterson and Maxine Paetro.  It’s YA literature, but the more I read, the more I feel that it sounds like The Umbrella Academy I watched on Netflix not too long ago.  It’s not the same, but it feels as close as damn it is to swearing.

I also got locked in a pair of plastic handcuffs.  Before you ask, the answer is No.  Nothing kinky at all.  I was visiting Eliza when little Nathaniel wanted to play cops and robbers.  He shackled me, tightly I might add, and left me sitting at the kitchen counter.  Eliza asked him where the key was and he went ashen.  Apparently, not all toy handcuffs have a safety release as we very quickly learned.  During the time of my incarceration, I needed to pee – not an easy feat, believe me.  The only way to get them off was to break them.  I felt sorry for Nathaniel, but he seemed relieved that Aunty Femme was no longer in jail.

I ate tomato soup, homemade bread and a silverside sandwich for supper tonight and now I’m going to relax with a chocolate-brownie-flavoured coffee in bed, ignoring the mountain of ironing that is threatening to fall on- and bury me.

And on the subject of burying things, I sincerely hope that I won’t have to murder anyone this week because I’m running out of places to hide the bodies.  I’d much rather just enjoy the rain.