…Star struck is one of them.  Because, in my mind, I’ve always thought celebrities are people, just like you and me.  Most of them work to earn an income (granted, much for than the regular Joe Bloggs on the street), they need to eat, drink and visit the loo, they need a roof over their heads, and companionship (be it in the form of six kids like Brangelina, or a cute dog, like Carl, the Cavalier King Charles Spaniel owned by South African Celebrity DJ Gareth Cliff.  Love him, or hate him, he is a straight shooter, with strong opinions – something we don’t see much of anymore.  People are too aware of having to be P.C., but not Gareth…he calls a spade a front end loader and takes the consequences in his stride.

Last night Elizabeth, Jesse and I went to a DJ gig Gareth was doing at one of the local hot spots.  Before he started his set, I got him to sign his book, with his trademark “dog drawing” which I bought for myself for Christmas.

I rushed up to him, pen in hand and asked “Sign my book!”  He extended his hand politely and said, “Sure, what’s your name?”  So I told him.  I was surprised at just how tall he is, because on TV, as an Idols judge, he looks much shorter…but, as Jesse so properly pointed out, “It’s because he’s always sitting down.” And he has the most striking blue eyes.  The book cover doesn’t do him justice.  I wanted to ask if he would take a photo with me, but I thought better, because my legs were shaking like reeds in the wind.

It was awesome, the music was great, the people were dancing and everyone was having a great time, although I will admit, I think I might be getting a bit old to pretend I’m a teenager, even though I have a better body now than I did when I was at school. 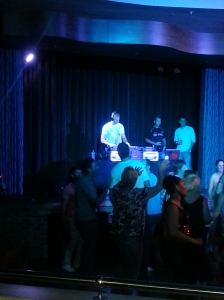 Our trio stuck around until after the witching hour and then we took a drive to McDonald’s, bought coffee and went and sat at the beach.  I can’t remember when last the three of us spent time together.  It was a super night, and hopefully we’ll get the opportunity to spend more time together this year.  The photos aren’t the greatest quality – it was dark and we were all quite tired… for those of you who don’t know, I’m the one in the blue top, and the long boots. 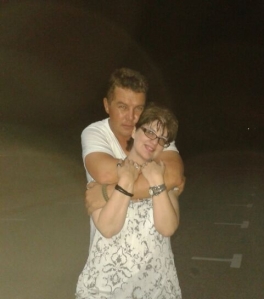